A walk through Andy Warhol’s “Unscreened” 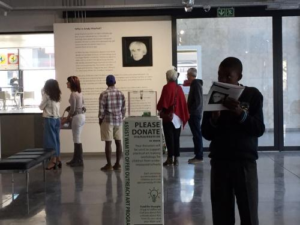 On Saturday, 2 September 2017, 45 Ikamvanites from the Ivory Park and Ebony Park branches had the pleasure of being taken through Andy Warhol’s “Unscreened” exhibition, held at the Wits Arts Museum. We are grateful for this opportunity which was made possible by Bank of America Merrill Lynch (BofAML), who sponsored the spectacular exhibition in collaboration with Wits.

While admiring the array of original pieces of artwork, the learners were privileged to have been given a private tour of the exhibition. They had a chance to interrogate the meticulous screenprint style of each painting. The paintings, which featured recognisable icons such as, Marilyn Monroe, Muhammed Ali, Mickey Mouse, Superman, and an animated self-portrait of the artist (Andy Warhol), seemed different from the styles of artwork in the gallery. The vibrant pop of colour and intentional use of angles was a style regarded to have transgressed the normal boundaries of what art was in the 1960s, yet was made popular by Warhol. 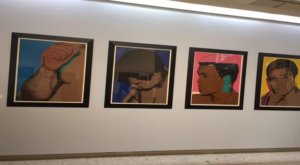 The exhibition was concluded by learners hanging personal messages reflecting on the exhibition on beams which previous visitors of the exhibition had an opportunity to put up. Many of the learners considered the exhibition fun, eye opening and a chance to get in touch with how they can breakdown norms in their own lives, whether it is through art or other ways in which they can express themselves and showcase who they are. We hope that one day we will have an opportunity to hear, see and learn of our Ikamvanites on platforms as big as the one we were invited to witness.

Ramadhani Urimubandi, a grade 11 from the Ivory Park branch, spoke highly of the tour and explained that, “although some of us are not interested in the arts, such as drawing and painting, it was educational and we got to learn the basics of the painting style and Andy Warhol. Besides the exhibition, I had the interest of seeing more of the whole building and see how the staff work in the entire WITS building, maybe next time we can view the campus.”

The excursion increased the learners’ curiosity about the spaces in which they will possibly study and work in one day. IkamvaYouth looks forward to exploring opportunities, such as University campus tours and one-on-one mentoring sessions with professionals etc with Bank Of America. We believe that this will awaken the career interests of learners and encourage learners to embark on educational pathways to eventually realise their dreams.

Upcoming events at the branch in September:

We believe these events are a culmination of the vision to lead learners to identify their significance in the spaces they live in, i.e. school, home etc, and take ownership and responsibility for the opportunities that will lead them to a dignified life.

The branch is planning on building capacity within the branch by training tutors on how to enable learners from grades 9 to 12 to begin thinking about possible careers and begin their individual processes.  This training will introduce them to practical online tools and resources that will equip them and support them.

We also aim to have a stronger Mentorship and Job Shadowing presence in the branch for the grade 11s and 12s, and we believe with timeous planning and involvement of external partners we can introduce learners to mentors that will support them more regularly in taking ownership of their lives post-matric.