KEEPING UP WITH ATLANTIS!

It is week 7 of tutoring, we are sitting in our Atlantis office and thinking, “we have come this far!” Of course, we still have a long way to go but if you think of the time when we first introduced IkamvaYouth to the community of Atlantis in June, presenting to schools and community forums, we had no idea how things would pan out as much as we had tried to plan for everything.

6-7 weeks ago on the 23rd of July 2016, IY Atlantis held its first tutor training/orientation day at IkamvaHouse in Salt River. This was the first time that the Atlantis superheroes met and they immediately hit it off! The Community Collaboration Department were the head facilitators for the day, Zoe Mann & Pepe Hendricks, and they hosted the training for the first time IkamvaYouth tutors. The tutoring methodology/pedagogy was the main topic of the day but the Superheroes also had a chance to be introduced to the history, vision & mission, values and the IkamvaYouth Model.

Andile Miya, a final year law student from UWC said, “I had no idea, how much detail goes into tutoring. Especially having to balance transferring information without coming across like a teacher and using the right questioning.”  After a whole 5 hour training/orientation, the Superheroes were confident to go and begin tutoring the Atlantis Ikamvanites. The day we had been waiting for had arrived, kickoff time! Saturday morning, 10am; it was a lovely sunny day in Atlantis and the Proteus Secondary School Hall was filling up with curious parents and eager learners, ready to hear about the branch.

The audience was then engaged on what the factors they had in mind that will make the programme a success. One of the parents mentioned that commitment from the learner, the parents and IkamvaYouth will make a big contribution, the community is one filled with challenges but all stakeholders should unite in the spirit of making this work! Afterwards, the parents had a chance to sign a pledge poster which will serve as a reminder that WE WILL MAKE IKAMVAYOUTH ATLANTIS WORK! This is what a few Ikamvanites had to say;

“We hope that IkamvaYouth can help us learn how to learn. We are happy that this programme came to our community and we are ready to work hard to make sure that we do better in our studies.”

“If you look at our community, our peers are joining gangs and participating in a lot of bad activities. I could be there with them but I chose my education first and that is why I joined IkamvaYouth. We want IkamvaYouth to help us become something one day!”

“It is such a cool thing interacting and learning with learners from a different school. We get to share the different explanations we get in class and explaining to one another makes it easier to remember the work.”

Despite the branch being far from Cape Town, superheroes came to make sure these learners get help. Nerves & excitement are to be expected in the beginning of something new and through all of that, Ikamvanites made it through week one and they were encouraged more than ever to make it work!

It’s week 7 and here we are again, ready to begin with another week of tutoring. We look forward to what the week brings and we also look forward to the very first parent meeting on Saturday.

Really the Ikamvanites are MAKING IT WORK! 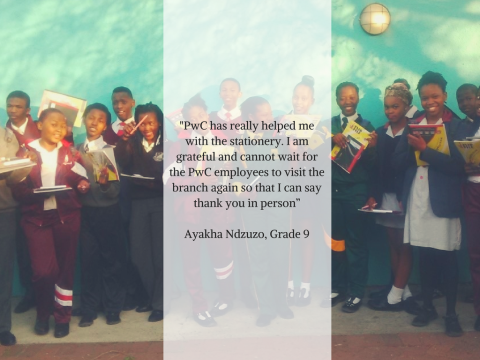